“Joy comes easily by simply glancing at Karl Mårtens’s deftly painted watercolour birds. They are popular and just a few days after the opening, many are already sold.

Flowers and birds are better depicted with watercolour than with photography, I dare say. That’s why botanical books are illustrated not with photos but with paintings. They show the distinctiveness of each species, beyond their physical appearance.

We all live with birds. This time of year I awake with the birds at dawn – and fall back to sleep. And we see them, but often without perceiving their details as they are shy and move quickly.

Karl Mårtens’ purpose is not to classify his feathered friends. He paints them with Japanese and Chinese calligraphy brushes on a special hand-made, coarse paper. His images are of Asian tradition, unframed and simply hung by clips. Instead of a signature he uses a round, red seal, with the simple addition of a date.

His images seem full of detail, but are often painted with sweeping brush strokes. The structure of the paper creates shifting effects in the image, and its lights and darks give it life.

The eye of each bird is a precision miniature, sometimes also the beak. The images come alive by the ensouled gaze of the bird.

Through this, Karl Mårtens captures some of the bird’s character. In fact he searches for the essence of the bird –the existential conditions for its species on earth. The artist is a birdwatcher of a different kind than the field biologists with their binoculars.

At the same time there is a tremendous familiarity with the appearance and uniqueness of each species. Paintings of cranes occupy such a great amount of the exhibit, that I take it for granted that Karl Mårtens has, like so many of us, stood at early spring dawn by the shores of Hornborgarsjön (famous gathering place for cranes) , and observed at the cranes dancing.

”Dawn with cranes” is the title of five studies of cranes, painted on thin muslin fabric and hung from the ceiling at different angles, creating a sort of mobile. As they move slowly, or as I move among them, the images change as the angle of vision changes.

A colourful Kingfisher greets me in the staircase. Flying swans and Storks glide by. Perhaps Karl Mårtens is better at portraying sitting birds than flying ones.

In the exhibit I find Black-headed gulls, a white Buzzard, Swans angrily staring at me, Magpies, Wagtails, Woodcocks, and many others of our avian friends of the Swedish nature.

In addition to the 40 or so large watercolour paintings, Tomarp also shows a score of bird lithographs.” 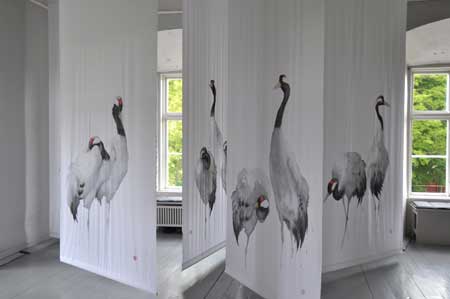 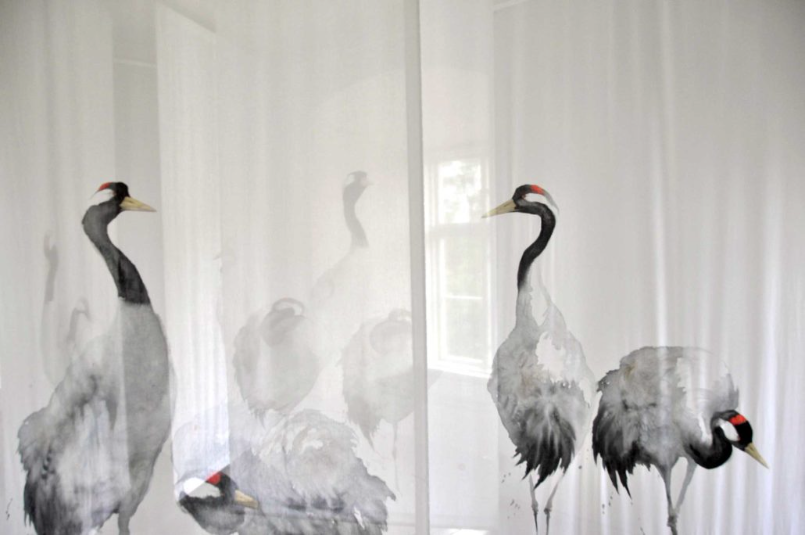